Family Day at the Bar Adventure

So, what does one do on a beautiful Family Day?

Leave the kids at home with the wife and fly out to the gravel bars for the day with your aviation family.  (Don't worry, I'm still married and had the wife's permission to go.)


BC General Aviation was hosting a fly out on the gravel bars up past Agassiz.  Since this was my first time flying onto the gravel bars, I did some research on what to expect.  Well, what I found out is to expect the unexpected.  You never know what you'll encounter, there can be soft spots, big rocks, small rocks, logs, branches etc.... so a fly by or two was required. 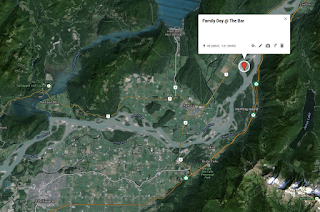 The winds today were light to none, except for at an altitude of 50' to 800' where the breeze was rolling over the hills and trees making for some interesting attitudes and movement in the aircraft.

My first fly by, I got a general idea of where I may decide to land.  My second go around, I went nice and low to check out how big those stones were.  There were some big ones and small ones but they seemed to be embedded in the sand.  Hmmm.... what to do?

The plan was to come in at a normal approach speed, but then to touch down as slow as possible to minimize the possibility of kicking up stones into my prop or tail feathers.  Well, it was looking really good, stable approach, had my touch down point in sight..... then at about 10 - 5' the wind stopped and she dropped! BANG!  Oh, my poor baby, what did I do to you?

After a short roll out on what felt like a cobblestone runway, everything sounded normal, my landing gear and wheels were still there.  Ok, lets taxi to the other planes...one bump at a time.

I shut down the engine and secured the plane.  Let me look at what I did to my bird.  During my walk around I found I still had 3 propeller blades (in perfect condition), the vertical stab, rudder and stabilator were all there and not a nick of damage.  Yahoo!  Time to relax and enjoy the day.

One by one, the planes started to arrive.  I didn't know most of the pilots but knew I would make some new friends today.  I met the gang who formed the BC General Aviation group. The B.C. General Aviation Association is a not for profit group who's mission is to make British Columbia more accessible to general aviation and to foster the camaraderie and sense of adventure that we all crave as we take to the skies.  Check them out at: www.bcaviation.ca

I knew this was the right place to be when Pete
from Van City Seaplanes showed up with a beautiful DeHavilland Beaver.  Naturally I had to go greet and help the guys beach the Beaver.  Again best plans don't always work out and the guys got pretty wet trying to get the Beaver beached.  My experience told me to wait and see, and at the end the Beaver was beached and I somehow managed to stay dry.  Ryan helped unload the kids and Pete's wife since he was already wet.

It was nice to sit and relax and take in the sun's   The smell of the campfire was soothing while I kicked back and took it all in. We had a couple visitors fly past to do some low and overs.  It felt like we had our own private airshow.

After socializing and relaxing for a couple hours, it was time to depart back  home.

I must admit, I was a bit concerned about my departure.  Will I kick up a rock on take off and damage my prop and tail feathers?  Shoot, where would be the best spot to take off from?  As I taxi out, I kept using stumps and logs as reference points where the best surface was for taking off.  I turned the plane into the breeze, did a run up and crossed my fingers.  The take off was again bumpy but uneventful.  After getting airborne I did a 180 degree turn and did a low and over to give the aviator salute goodbye.

I'm looking forward to the next BC General Aviation fly out.

Great article Dave! You have a gift for writing! It was a pleasure to meet you today! Looking forward to the next time!