I've had several inquiries about Vargas Island so I'll try to sum it up here.


★ Meeting aroud 11:00.
☆ Bring your own lunch.
★If you want to talk to someone on the beach for a wind report we have a couple of handhelds that will be monitoring 123.45
☆Land on the damp sand.
★avoid the dry sand as you will probably owe a couple slices of pie to the who will push you out.
☆ Best to top up your fuel in Qualicum because Tofino is very expensive.
★Have fun and fly safe.

》》》》Note: In honor of our dear friend who tragically lost his life today doing what he was passionate about.  We will observe a moment of silence at noon, as he would have been with us on this trip.  RIP My friend.
Posted by Unknown at 8:40 PM No comments:

This Saturday looks to be a great day to visit Vagas Island.

Anyone one interested in going please email me at dcbianchi12@gmail.com.

Low tide is at 11:15 so I would like to arrive around 11:00 hang out, have a picnic lunch and relax to take in the scenery and sea air.

Hope to see a good turnout.

Posted by Unknown at 7:49 PM No comments:

A Quick Trip Over to Qualicum Beach


Here's a little shameless plug for an airport that you may not have been to in a while, and for me it had been easily 12 years since my last visit by air. Oh, what airport you ask? Why I'm talking about Qualicum Beach Airport (CAT4), over on Vancouver Island. With a modest cruise speed of approximately 100 knots, we made it across in about 55 minutes air time.

Conveniently David Bianchi's parents live close to Qualicum Beach Airport, so we planned to meet up with them for lunch. In recent months I had actually been told that the restaurant in the airport terminal was very good, so who was I to turn down an opportunity to fly to an airport that I hadn't visited in ages? I'm glad I went.

The plan was for David Bianchi to fly his Tornado over from King George Air Park and meet me at Delta. It's easier that way, since getting the Jodel into King George would likely require a rebuild before taking off back out of there. That's right, the Jodel isn't the best airplane for short strips, but it does well enough for the type of flying we've been doing of late. David's wife Jen was also going to meet us at Delta, and I would be flying her over to Qualicum in the Jodel, 'cus hey, who doesn't love visiting their in-laws? 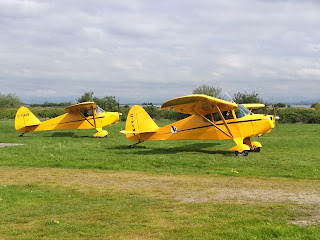 Before David or Jen arrived, I was pleasantly surprised by the arrival of Len and Lee in their nearly identical Piper Vagabonds. They are both immaculately maintained and their standard Piper yellow paint schemes glistened in the morning sunlight. I'm pretty sure yellow with a black stripe was the only colour scheme available when those planes left the factory. It probably had to do with marketing. Just like how John Deere products are all green and yellow, Pipers were painted yellow with a black strip to easily differentiate them from their competition at a glance. Sorry Leon, I can feel myself going out on a bit of a tangent... I'll get back to the story right away.

As it turns out, Len and Lee were going to be headed up to Merritt for a little day trip. Never having flown up to Merritt, I was kind of intrigued, but I had already made plans, and I'm sure David B wouldn't have liked me taking off in the opposite direction with his wife.

Since we were going to be flying from Delta to Qualicum Beach in a "Plus One" formation, we called Kamloops Flight Service for two transponder codes, and asked if two codes were necessary for our flight arrangement, or if one code would be fine to cover the both of us. Our flight service specialist wasn't completely sure, so he issued us two codes, but as soon as we departed Delta and talked to Boundary Bay tower, we quickly learned their preference. The lead plane would carry a specific squak code, while the second airplane in the group would carry the regular 1200 code. 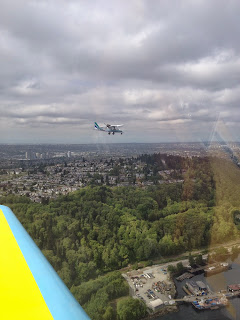 Shortly after Len and Lee departed towards the east, the Double Davids and Jen departed north, towards the Alex Fraser Bridge. From there we continued north towards Burnaby Mountain, and then turned westbound to fly through Vancouver Harbour at 2000' along the north shore. Once past Point Atkinson (and for any non-pilots out there, it's also known as Lighthouse Park), 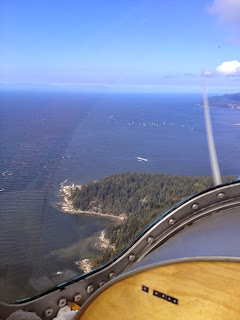 we were released from their control and we were into the uncontrolled airspace known as Sechelt Traffic. Funny enough, Sechelt Traffic shares the same frequency as King George Air Park, so as we made a position report over Gower Point, near Gibsons, we got a call from Stumpy and James who were just departing King George in Stumpy's fancy and fast European Tecnaam. As it turns out, they were headed to Qualicum Beach Airport for Lunch, without knowing that it was our plan as well. 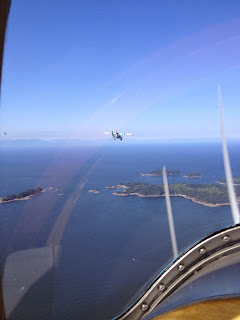 So, along the sunshine coast we cruised, then as we approached Lasqueti Island we made our climb up to 4500' so that we could have a hope of gliding back to shore in the event of an emergency. Practically as soon as we got up to our cruise altitude, it was time to come back down.

Qualicum Beach Airport's circuit pattern has both circuits on the west side of the airport, so just like in Chilliwack, you cross over midfield from the east, and turn left or right depending on what the winds are doing. That certainly makes it easy! David B led the way into the airport and was able to land ahead of a KD Air Navajo that was arriving on a scheduled flight, but I didn't have visual on the Navajo, so I let him go ahead of me, which was probably wise, considering his much faster approach speed. 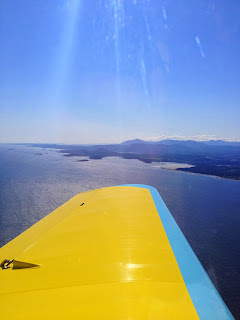 After we landed and were clear of the active (preferred) runway, it was time to find some parking. Thankfully David B had already parked, and his Tornado was easy to spot, so Jen and I headed towards where he was. As we taxied along, we came to a very tight squeeze between a poorly parked Piper Comanche, and a Nanchang CJ-6. I took a look, and made the prediction that I would be able to make it through without donating any paint to either plane, and with some wriggling and tippy-toe taxiing, we made it through with about 6 inches to a foot clearance on their side. 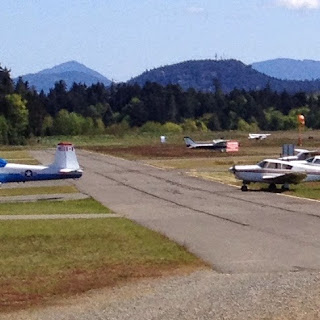 With both planes parked, we were immediately greeted by David B's parents, Frank and Silvanna, and we headed to the terminal building. 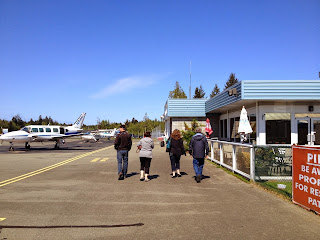 We decided to wait for Stumpy and James to join us for lunch, so we made a reservation for 7 and waited for our friends. As we waited, a KD Air pilot came through the terminal doors and David B asked him if he was flying the Navajo that had just landed, and before saying yes or no, he asked whether we thought he had done something wrong, but of course we were just hoping to put a face to the voice of the pilot we had worked together with in the uncontrolled airspace around Qualicum. We had a good laugh and then he went to take care of some of his post-flight paperwork.


Soon after, the Tecnaam showed up with James and Stumpy aboard and we sat down for what was indeed a very nice lunch. 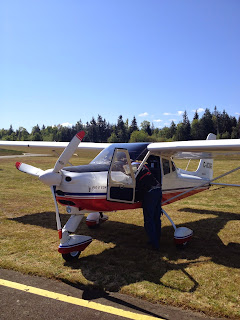 And, just like identical twins, David B and David M both ordered the exact same meal, without planning to do so. In fact, it's become such a game, that David B whispered into his wife's ear what he was going to have before he asked me what I was having. Yup, it was the California Chicken Club Wrap for the both of us!

After lunch Stumpy and James departed for home in the Tecnaam, while the Double David's and Jen went off with David B's parents to do a little bit of exploring. We ended up being taken Morningstar Farm, which was hardly a 10 minute car ride from the airport. 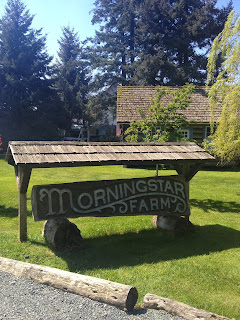 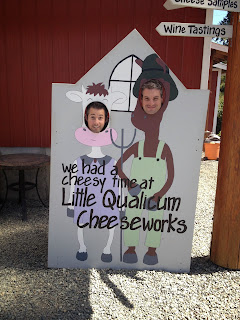 This is an amazing little family farm where they produce the successful and delicious Little Qualicum Cheese, which you may recognize in the specialty cheese section in your local grocery stores. 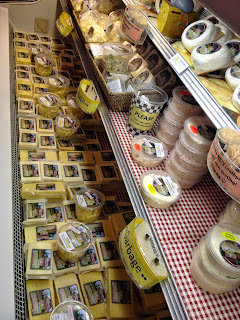 The farm was open to visitors and you could see the actual cows that produce the milk for their cheese, as well as rabbits, chicks (woah pilots, I mean the  little baby chickens), pigs, donkeys, a goat, and a bunch of friendly sheep. 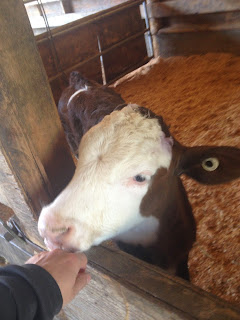 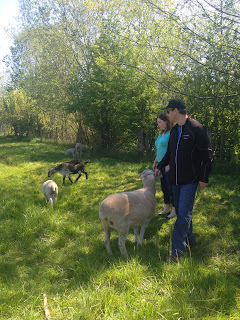 After hanging out with the animals it was time to try samples of the cheeses, as well as the fruit wines that they produce. The farm has a little bit of a giftshop/store where this all went down, and I gotta say, they've got some nice cheeses! 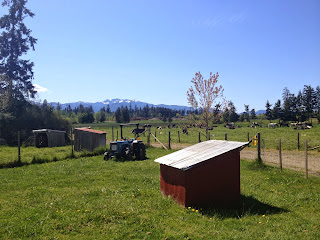 With our tummies full of  cheese, it was time to head back to the airport and then blast off back to the mainland. Instead of trying to taxi between the two offending airplanes, we both elected to bushwhack through the grass and avoid the situation all together. Bushwhack is a bit of an embellishment, it was flat and entirely safe for taxiing.

Out of Qualicum we climbed, across the Salish Sea and over Lasqueti Island, and then past Sechelt and Gibsons. Over Bowen Island we called up Vancouver Harbour and they cleared us through their zone via Third Beach and the south shore. 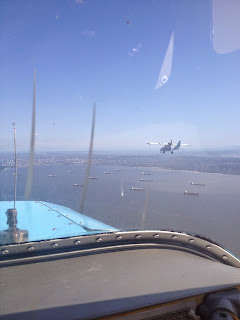 We cleared Harbour's airspace at the Second Narrows Bridge and once we reached Burnaby Lake, we went our separate ways, David B heading back to King George, and David M and Jen going back to Delta. We caught the Boundary Bay ATIS, then contacted Boundary Bay Outer Tower at the Pattullo Bridge, where they informed us that there was no traffic between us and Delta Air Park, so we could switch to Delta Air Park traffic at our convenience.

After an uneventful landing into Delta, we put the Jodel away, Jen went to King George to pick up her husband and take him home, and I trundled back home to Vancouver.

Written By: The Author (David McIntosh)
Posted by daveymac82c at 6:12 PM No comments: