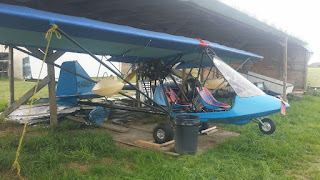 
In all my years of flying, I had never done the famous 99's Poker Run, but I have wanted to participate every year ever since I learned about it, over 10 years ago. Sadly though, every year I couldn't join in on the fun, either due to a lack of aircraft or lack of having the right days off work.

With great luck, the stars aligned for me this year! The Jodel was healthy and raring to go, and I was organized enough to have booked the day off work. The poker run is an exciting fundraiser put on by the BC Coast 99's. The 99's work tirelessly to encourage young women to follow their dreams of becoming pilots. They raise money to put together scholarships for prospective pilots, as well as encourage the fun and fellowship of flight, and that is where the Poker Run comes in.

The way you play this interesting game of poker is, you start at any one of the participating airports, Victoria (CYYJ), Nanaimo (CYCD), Squamish (CYSE), Boundary Bay (CZBB), Delta Heritage Air Park (CAK3), Pitt Meadows (CYPK), Abbotsford (CYXX), Langley (CYNJ), and Chilliwack (CYCW) and you fly to four more airports, collecting playing cards to build poker hands and whoever has the best hand at the end of the day wins the top prize. 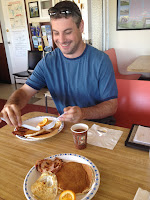 Then, in descending order the next best hands gets to pick their prize, and this continues until all the prizes are handed out. It's not as easy as you may think. There are more details to how the game is played. At the beginning of the game you decide how many hands you are going to buy. Either 2 hand for $10.00, or 5 for $20.00 (some planeloads have quite a few hands - Betters their chances to win prizes!). Each hand is given to you as a blank sheet with a grid of boxes that correspond with each playing card value. You fly from one airport to the next and go to a little tent where you pick a card from a bin full of cards all face down, "Go Fish" style. The first card you pick gets recorded on your first hand sheet, and then you pick another card and it gets recorded on your second hand sheet and you keep doing this until all your hands have a card recorded. That way they keep us all honest is by using specially selected stamps at each airport. The stamps have images of animals such as elephants, birds, deer, etc. When you're done at one airport, you fly to the next airport and go through the same process until you have five cards randomly selected for each hand.

The morning of the Poker Run also coincided with the Delta Air Park Pancake Breakfast, so David B met me at CAK3 where we had breakfast and discussed our plan of action for the Poker Run. With CAK3 being a participating location, we registered and got our first hands before even moving the Jodel out of the hangar. Yes, the double David's would be doing the Poker Run together in the Jodel. 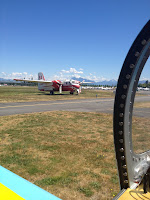 From CAK3 we took off and made the long trek westward to Boundary Bay Airport. We picked our cards quickly, got our hands stamped, and jumped back in the Jodel; next stop Langley Airport. 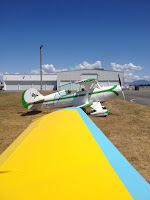 We parked the plane, found the 99's tent, had a wonderful chat with the volunteers there, picked our cards, got stamped, and then blasted off for Abbotsford. Abbotsford was rather busy, but we were able to find parking, did the deed, then headed for Chilliwack. At this stop we decided to have lunch, and pie of course. We were clearly not alone in arranging Chilliwack to be our lunch stop. 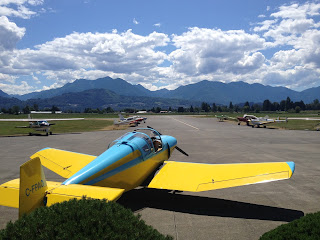 The apron was full of airplanes, and the airport restaurant was packed with patrons. Our idea was to then fly right over the mountains to Squamish to say hello to Collette and the gang at Glacier Air, but as we consumed our lunch we realized that time was not on our side and we'd be cutting it close just getting to Pitt Meadows in time for the meet up and prize draws.

So, sadly we had to scrap our plans of flying to Squamish. Arriving at Pitt Meadows, we finally had time to breath, and to look at the poker hands we had built up. Out of my five hands, I only managed to scrape together one hand with a pair of fours. Otherwise the rest of my hands were a Jack high or worse. David B faired only slightly better. Astonishingly though, some participants had great luck with picking cards and some had put together some amazing hands that would even win against the pros in televised poker tournaments! 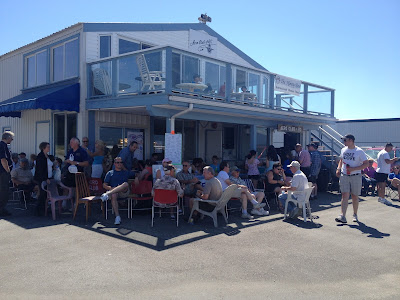 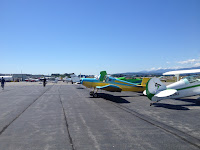 Some of the prizes included an annual inspection at Coast Dog Aviation, introductory ultralight flights at King George Aviation, a BBQ set from Johnston Meier Insurance, one hour in the sim at Classic Aviation, $100 in Avgas, tickets to Vancouver Canadians baseball games, whitewater rafting, instrument and avionics work at Maxcraft Avionics, and underwater egress training at Pro Aviation Safety Training, among other great items. As the winners were being announced there was a BBQ that was a bit of a fundraiser for the Aero club of BC there that many people were enjoying, and David and I would have too, had we not filled ourselves up at Chilliwack Airport less than an hour before.

It was really great getting to meet so many wonderful aviators and continually bump into them as we flew from airport to airport while on the Poker Run. Even though we didn't win anything, we had a fantastic time, and we will absolutely be playing again next year!

Until next time, fly safe and fly smart.

Written by: David McIntosh
Posted by daveymac82c at 9:44 PM No comments: 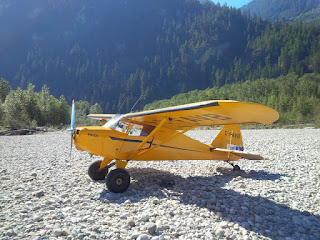 Upper Pitt River . Mostly a rock pile like this. Hardly any places with smaller rocks.  Beautiful place but rocky  !!

Weekend was season opener so I threw my mountain bike and a .22 into the back of the Citabria and headed up to Stave Lake to try my luck peddling the back roads.  Game was scarce but there must be a large elk herd there to make all those tracks on the sandbars.


Took the back seat out and the front wheel off.  Easy fit. 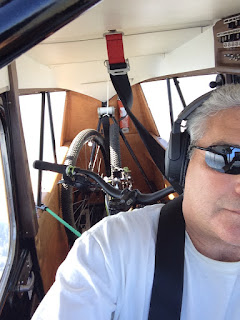 Tools of the trade.  Stave Lake strip seemed more brushed out and smoother than I've seen it for a while.  Lots of logging activity, and the west road services the Northwest Stave River power project. 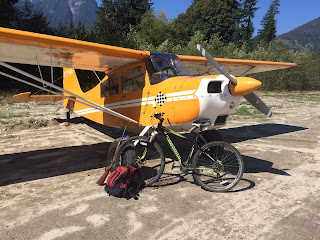 About 15km from the plane, stopped for some lunch.   Some riverboats make it a little ways up the river and you'll see a few heeled up on the gravelbars, but by here they've petered out. 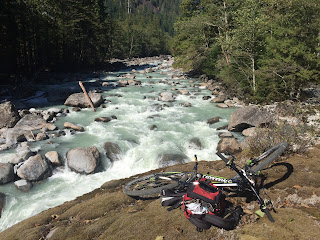 On the way back I cruised by the Nazi Gold crashed bomber site up behind Widgeon Lake.  Usually you can only see the odd piece sticking out of the snow, but this year it is all out in the open. 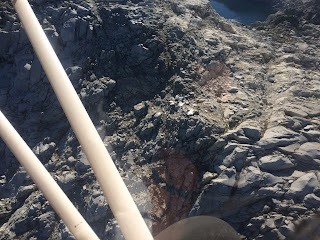