It's getting to be that time again group. I have booked the tables for our Christmas lunch, Noon on Sunday  December 13 at the Big Ridge pub, same place as the past three years. Everyone is welcome, pilots and non-pilots. Bring your friends.

It's dutch treat again meaning that you order your own lunch and pay for it. We are hoping for a great turnout again this year. See you there.

You can access the new copy here via : www.tinyurl.com/ANJMagzter,

(actual PDF copy is too big to post here)


Bamfield is located in BC along the Pacific Rim National Park at the southern entrance to Alberni Inlet. 89km South West of Port Alberni, the area is a mecca for sports fishermen chasing giant Chinook Salmon, or gargantuan halibut. It is also the northern terminus of the 77km West Coast Trail, which attracts serious hikers from all over the world, and there is also some commercial whale watching operations in the area.

With the demise of the commercial fishing and the forestry industry in the 1990's, tourism has become king. The only large employer is the Bamfield Marine Research Centre, which is undergoing a $12-million dollar expansion.

The village, which is accessible only by grinding gravel road, by sea, or by air, lies on both sides of Bamfield Inlet, a narrow stretch of water with houses, lodges, shops, and sundry businesses clinging to both shores. It is an idyllic scene, almost like a Hollywood set except that is not contrived.

Our Pacific Pilot flying group had been thinking about a trip to Bamfield for some time, and after reading the stories about the millionaire owner of the Bamfield airstrip who was supposed to be renovating and improving the airfield, we were intrigued and determined to check it out. 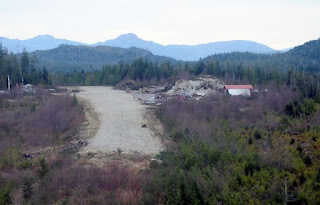 So, on a bright sunny in June, two airplanes headed out from our home base at King George Airpark, flew through Vancouver Harbour, along the Sunshine Coast to Half Moon Bay, and crossed the strait to Vancouver Island, over Qualicum Beach and direct to the strip at Bamfield. The trip could not have been better, with smooth air and high ceilings. I was co-pilot to my buddy Greg Stump in his Tecnam, and Darrell and Sharon were flying their Eurofox. 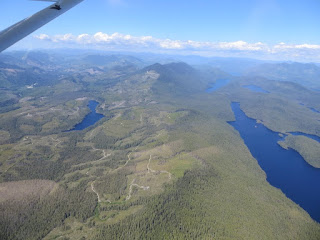 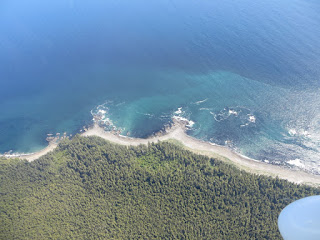 We had heard that the gravel strip was fairly rough, but a couple thousand feet long which is more than enough for our Advanced Ultralight aircraft. Although I did not pace the strip, I believe it is not quite that long as both airplanes were on the brakes to stop before the end of the usable part of the strip. 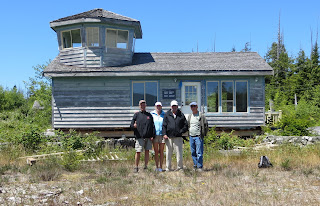 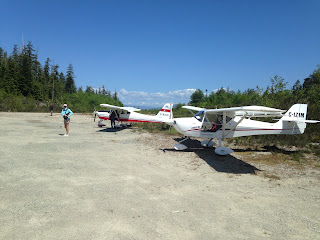 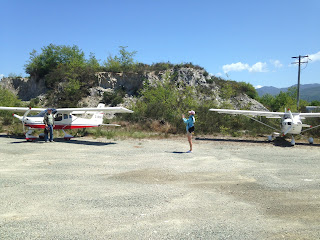 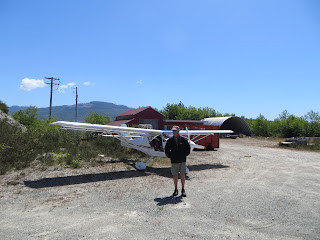 Once on the ground, we decided to walk the 2.2km into town although there was a taxi in the form of a lady driven full size van. Price for a run into town, $15.00. Before our walk we checked in at the customs shack at the terminal building. Not sure what the story is with the customs office.

When we arrived in town, after a nice walk through the trees, we started looking for somewhere to have lunch and we were advised that there was a nice boardwalk Bistro on the other side of the inlet that served great salmon dishes. We had to call for a boatman to ferry us across the inlet and met with Dane Stabel, our ride across the bay. A very interesting guy and no ordinary boatman, Dan was born in NWT, and moved to Bamfield in 2005. He says he will never leave. Dane has a bachelor of Science in Biology, and a Masters of Science in Environmental Studies from the University of Victoria (UVIC). A very interesting and knowledgeable guy, Dan is an underwater photographer and videographer, and travels the BC coast working on fisheries and other projects. He is planning to write a book on the area one day. Dane also runs and owns GPO Charters, a Kayak rental and charger business in town. I would highly recommend anyone visiting who needs a guide or charter to call Dane. 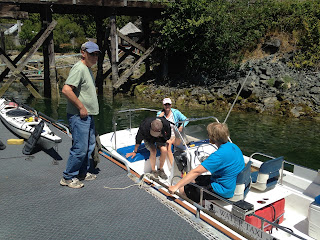 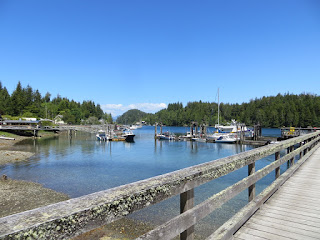 The Bistro was idyllic. The salmon burgers were superb. Good food and great company. It doesn't get much better than this. 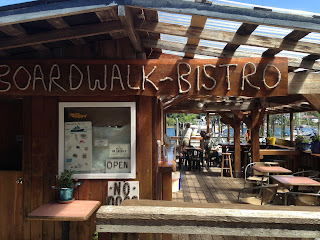 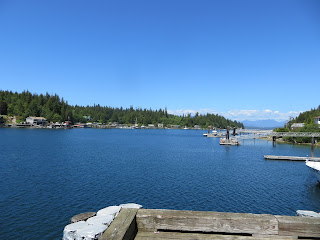 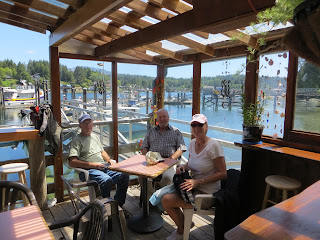 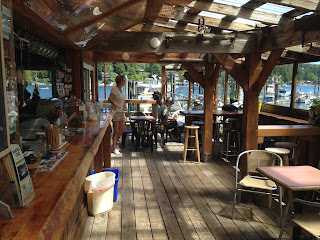 After a great lunch and a walk along the beach back to where we were being picked up for our ride back to the other side of the inlet, we called our water taxi and enjoyed another trip across the inlet. Dane had left a 2-way radio in a telephone box on the boardwalk so we could call him for the return trip and he arrived a few minutes after we called. Not that were in a hurry to leave.

Because the day was so nice, we elected to walk off some of our lunch calories on the couple of kilometers back to the airstrip rather than call the taxi.

We checked out our birds and took off for home base back at King George Airpark, but taking a different route back. What a great flight back along the west coast of Vancouver Island, through Victoria's zone and across the strait to White Rock. 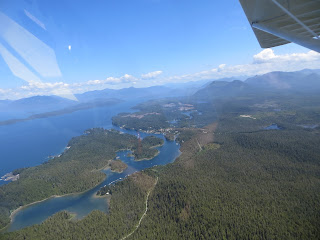 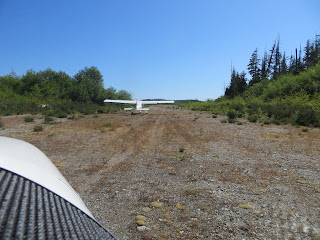 The trip to Bamfield was one of the most enjoyable trips our flying group has taking this year. There were only four of us on this one as it was one of those days where everyone seemed to have something else to do. I for one will be going back to Bamfield. Maybe we can scare up a larger group next time. There is some interest among the group for flying in for an over-night stay so we can explore the historic area. I'm in!