So, I thought I would share my experience what it is like to fly into the largest air show in B.C.

Well, it all began 3 months ago when I got an email from the Abbotsford Airshow organizers asking if I would like to put my aircraft on display again this year.  So after asking my fellow pilot friends if anyone else would be interested, it was decided that yeh, let's do this.

After discussing some logistics we decided that we would ferry the planes to YXX on Thursday evening after the airspace re-opened at 19:20 hours.

The plan now is for James and Stumpy to fly the Rans Coyote, David McIntosh would fly the Renegade Spirit and I'll fly the Titan Tornado.  There was only one problem, David M. had never flown the Renegade before and she had been sitting for a couple of months not being flown.   James and I started to inspect the Renegade to be sure it was airworthy before we let our friend fly it.  What we found was that planes don't like to sit un-flown for periods of time.  After James and I spent many hours changing fuel lines, spark plugs, rectifier and getting the propeller refurbished in Vernon, the Renegade was finally ready for a test flight.

Since David M. had never flown a Renegade before, let alone done a test flight we were able to contact Phillipe (who flys a Renegade on a regular basis) who graciously accepted to test fly our Renegade and get David M. checked out on it.

﻿
The big day came, Phillipe gave the Renegade a thumbs up and David M. was all checked out.  Time to depart to YXX.
﻿
﻿

Since the Renegade doesn't have a transponder, we planned to escort the Renegade into YXX with the Titan.  Well, one small problem, the Renegade's top cruise speed is approx 60 kts, the Tornado cruises at 93 kts.  After doing several 360 turns so the Renegade could catch up, I discovered that if I lowered my flaps about 5 degrees I could comfortably fly the Tornado at 60 kts and escort him into YXX airspace.

Since the light winds were favoring runway 25 in YXX, I opted to land on 07 but David M. decided he would favor runway 07 so we split up with YXX tower advising us which way to land.  As I was on short final for runway 07 the F22 Raptor and a Mustang flying formation flew right over midfield, now I knew the airshow was on.

After landing and receiving taxi instructions to the static display I was starting to wonder where the marshallers are for the general aviation displays and where should I park.  After waiting a couple of minutes, and no one showing up I decided where to park the Tornado for them.  After shutting down I marshaled David M in the Renegade beside me and James and Stumpy in the Coyote next to the Renegade and there we had our own display of aircraft for the airshow.  As it turned out, the volunteers had left for the day and we arrived late.
﻿﻿﻿

By the time my wife Jen got to the airport to pick us up and bring us home, we were all starting to get this feeling we were missing something..... dinner!  We hooked
up with Jen and made our way over to "Hanger 13" where the volunteers and fellow pilots go for food, drinks and dancing.  Because the general aviation volunteers were done for the day, we hadn't registered our planes and gotten our passes yet so after we convinced the bouncers that we were pilots and they let us in (except James because they loved his British accent) we got some drink tickets and ordered up a "Columbus Burger".  Note: the Columbus burger is 2 beef patties and a cut up hot dog!  After we had our fill of burger and beer we headed home to rest up .

Friday morning, we packed up our camping gear and headed back out to YXX.  Since David M. had to work that morning, James and I went first, we registered the aircraft and got our passes then we set up our tents and started to explore the show. 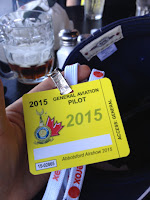 Jen, David M. and my son Wyatt showed up just in time for dinner, so we headed over to the Red Barron Bar and Grill for a bite to eat.  Half way through dinner we realized the night show had started!  When the F22 Raptor was putting on its demonstration we made our way back to the infield to try and catch the last part of the night show.  On our way back we met up with Heidi who joined us after work.
Now, for those who may not realize getting around at an airshow isn't as easy as walking over to the planes.... nope, you need to get shuttled across the active taxi way and past the hot side (performing aircraft) this is a task that can take up to 30 min each way waiting for a ride.  By the time we got to the show, there was only 45 min left.  After the fantastic night show, we got a ride back to the Abbotsford Club house where Jen, David M., James, and Heidi got off to head back to Hanger 13 for some adult beverages while Wyatt and I headed back to the campsite.

Saturday morning we got a 6 AM wake up call from the scheduled West Jet departure flight.  After we got up and made our way to the Abbotsford Flying Club House for breakfast we said good bye to Heidi who had to head off to work.  We started our day by sitting by our planes and played ambassador for the Pacific Pilots.
Darryl and Sharron flew the Eurofox, Leon and his wife, Connie flew the Symphony 160 and Jock and Bruce arrived in the Pelican so now we had six aircraft now on display from the Pacific Pilots Group.
﻿﻿﻿﻿﻿
As we watched the show and talked with many spectators as the day carried on until this odd liquid started to fall from the sky.  After our group took shelter under the wing of the Tornado the rain passed and it was time to head back to Surrey and camp out at home since there was a good chance of more rain showers that night.
Sunday was a spectacular sunny day. James, David M. and I met up at King Gerorge Airpark where Jen drove us out to Abbotsford.  Once we got a lift to go air side back to our planes, we spent the day talking with curious
spectators, answering questions about general aviation flying and particularly flying ultralights in Canada.  This seemed to be a hot topic as the technological advancements of ultralights over the years has surprised many people.

With the Snowbirds concluding the show, it was time to pack up our gear and fly the toys back home to King George.  Like a well oiled machine, the organizers marshaled the static planes off one by one (except for me who was escorting the Renegade Spirit).  Once we got our squawk code, we lined up for our turn to take off. 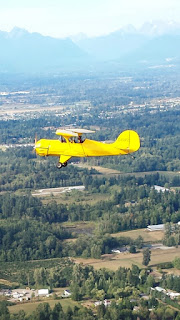 We got our clearance and David M. and I were airborne.  Once we cleared Abbottsford airspace we were on our own back to King George.
On our way I took a slight detour to give a low and over at Intergalactic Aerodrome (Bob Barron's Place) as Bob wasn't able to join us this year at the airshow.
As usual after we put the planes back in their hangar's, off to the usual watering hole (Big Ridge Brewery) to celebrate a successful event.

Until next year, safe flying.

Posted by Unknown at 4:42 PM No comments: